Why is Ginger Essential Oil Good For You?

According to extensive research,ginger essential oil can help with all sorts of respiratory problems.In fact,if you are someone who has difficulty breathing at times or face shortness of breath,you may just want to consider inhaling ginger essential oil. Inhaling ginger oil can even help clear up mucus inside your throat and lungs.As a result,it can be very effective when you’re suffering from a cold or flu, or even for more serious conditions such as bronchitis or asthma.Asthma is a respiratory disease that can induce lung swelling, excessive production of mucus,and muscle spasms.As a result of these symptoms, someone with asthma is unable to breathe properly.Asthma has many different causes.It can,for example,be caused by a hormonal imbalance, pollution,stress,allergies,and infections.Ginger oil’s anti- anti-inflammatory characteristics reduce the swelling in the lungs and open up the air passageways.This is proved by one study that states that ginger oil can help clear any inflammation,irritation,or infection in human air ducts.For this reason,anyone who has a breathing problem is likely to benefit from the use of this oil. 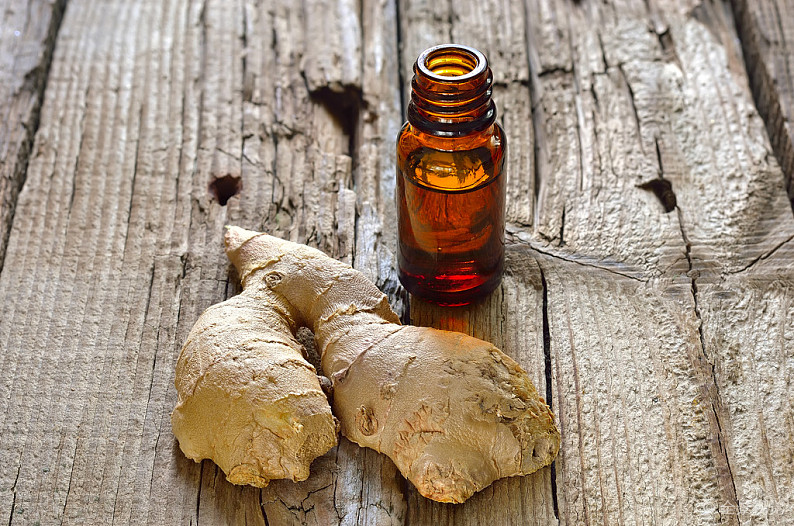 Ginger essential oil has a rich concentration of antioxidants. As a result,ginger oil can be helpful when it comes to treating liver cancer as well as relieving the symptoms of it.

3. Helps with Digestive and Stomach Problems

Digestive problems such as an upset stomach,indigestion, and stomach aches are pretty common things that many people suffer from on a daily basis.However,you shouldn’t take these aches and pains lying down.The next time your stomach doesn’t agree with you, you should get a hold of some ginger essential oil.According to one publication,ethanol was used to induce the formation of gastric ulcers in rats, and the effects of ginger oil were tested on removing the ulcer symptoms.It was found that after consuming ginger oil,the symptoms of gastric ulcers,such as bleeding of the stomach walls,was inhibited significantly.

4. Relieves Symptoms of Food Poisoning and Other Infections

Sometimes,bacteria in the stomach can cause food poisoning and other similar conditions.Ginger essential oil can effectively relieve any such symptoms because of its anti-fungal properties.The anti-fungal properties of the ginger root,found in its oil, can significantly reduce the potency of any bacteria that may be causing you stomach problems or other infections in the body.

Inflammation in your body is a normal response to pain and leads to quicker healing.Sometimes,though,your immune system might overreact and begin to attack even your healthy tissues,causing an unhealthy amount of inflammation.Excessive or abnormal inflammation in your body can cause pain,bloating,swelling,and all other sorts of discomfort.This is because inflammation implies that your immune system is incapable of protecting your precious body tissues any longer.As a result of abnormal inflammation,you may end up with serious conditions such as irritable bowel syndrome,arthritis,a leaky gut,etc.During this time,you should consume as many anti-inflammatory foods as you possibly can to prevent your immune system from going into overdrive.And guess what? Ginger is one of the most anti-inflammatory plants that you can consume.Research has found that zingibain is the anti-inflammatory component of ginger oil that is mainly responsible for reducing the amount of inflammation that one has to deal with.Research also found that ginger oil can reduce the quantity of prostaglandins in the body.This is a substance that is responsible for the pain that you experience in your body.As such,ginger oil consumption can reduce the symptoms of migraines,headaches,muscle spasms,and even arthritis.One publication found that mice who were treated with ginger essential oil for a period of one month displayed a massive reduction in symptoms of inflammation.

If you are someone who suffers from high cholesterol levels,you may want to consider regularly consuming ginger essential oil. According to a 2016 study, consuming ginger essential oil massively reduced cholesterol levels in dialysis patients.The study was meant to test the effect of the oil on the lipoproteins and serum lipids of the patients.Not only is ginger essential oil helpful in ridding the body of ‘bad cholesterol,’ it can even improve overall heart health.In fact,research at the University of Maryland found that ginger oil can prevent the blood from clotting.Clogged blood vessels are the number one cause of a stroke or heart attack.Since ginger oil opens up clogged blood vessels,it can improve your cardiovascular health entirely.Additionally,ginger oil can improve levels of lipid metabolism in the body, reducing the risk of diabetes,and improving heart health.

As ginger essential oil has a rich concentration of antioxidants,it can inhibit oxidation in the body that is caused by harmful free radicals.An antioxidant is any substance that can prevent different sorts of damage to the cells,especially damage brought about by oxidation.Oxidation is the number one cause of dementia, heart disease, and even cancer.By inhibiting oxidative processes in the body,ginger oil can help improve your wellbeing on the whole.One study found that ginger oil can reduce oxidative processes brought about by aging by limiting the damage caused to body cells by the free radicals.Other research has discovered that ginger oil’s anti-cancer properties can be attributed to the presence of two components – gingerol and zerumbone.

A number of people across the world suffer from a low sex drive or an inability to perform well during sex due to a lack of libido (sexual energy).Another common sexual problem men all over the world suffer from is impotence (erectile dysfunction), caused by insufficient libido.Erectile dysfunction refers to the inability of a man to maintain an erection for a prolonged period, as a result,not having satisfying intercourse.Erectile dysfunction can be attributed to either psychological or physical problems.Whatever the cause, impotence is problematic for people everywhere. Sometimes, people resort to medications and chemical substances in an attempt to boost libido levels or to cure impotence in the body.Ginger essential oil is a much safer, all-natural alternative to these medicines because it functions as a natural aphrodisiac (a substance that boosts libido).Ginger oil can even rid the mind of feelings,such as a lack of self-esteem and low confidence.So,the more confident you feel,the more likely it is for you to enjoy any sexual experience.