What is jojoba oil?

Jojoba oil is naturally distributed in the Sonoran desert area between 25°~34°N latitude and 109°~117°W longitude in North America. It mainly includes Phoenix (Arizona), Los Angeles (California) in the United States, Baja California in Mexico, and a small number of areas in New Mexico and Texas. Originally produced in the United States, it was once known as the "desert nemesis" by the United States, and the oil extracted from its fruit was known as "liquid gold".

The structure of unrefined jojoba oil

It is very different from other kinds of vegetable oils. Its molecule is a unique wax ester structure, which is composed of fatty acids with 18-24 carbons and fatty alcohols with 18-24 carbons. It has very stable performance, light resistance and high temperature resistance. General vegetable oils (such as olive oil, grape seed oil, sweet almond oil, etc.) are mainly composed of triglycerides, which are easily decomposed and spoiled. Jojoba oil does not contain such structural components, so it is an oil that can be stored for a long time. 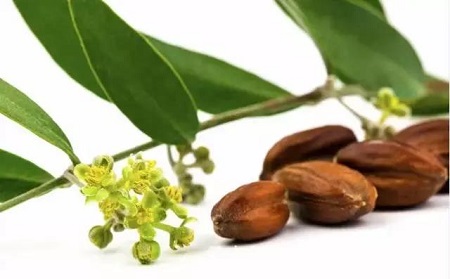 The freezing point of pure natural jojoba oil is 7～10°C. It is normal to be crystalline ice below 7～10°C. Please store it in a room above 10°C in winter. If you use it without conditions, it can be omitted. Use when heated to a melted state. Repeated melting of jojoba oil will not affect the quality.

Its freezing temperature is also a reference value for identifying its purity.

There are many ways to extract oil from jojoba seeds. The top extraction method takes its virgin oil, which is the first cold-pressed extraction process, which retains the most precious original substance of jojoba oil. The oil taken out is beautiful golden yellow, so it is also called golden jojoba. The identification of this precious virgin oil will have a faint nutty fragrance in addition to the color, giving people a feeling of fullness. Slightly applied to the skin, it will quickly penetrate and absorb.

In addition, after filtering and processing virgin oil, the color is clear and odorless, so that it can be added as some cosmetics, or after multiple low-temperature extraction and solvent treatment, the oil can also be used for industrial use, but these cannot be regarded as the most Perfect golden jojoba oil. 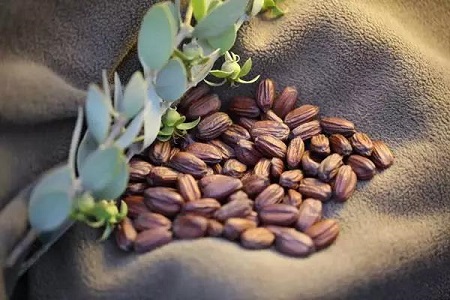 Pure natural jojoba oil is used as a base oil in aromatherapy and used in blending with other aromatic essential oils. Among the various formulations of aromatherapy, only cold-pressed pure natural jojoba oil can help the plant essential oil to fully exert its effect. It is a good natural ingredient for aromatic beauty products and can bring a kind to the skin. Delicate and soothing feeling. Due to its excellent permeability, it contains liquid wax that is closest to the sebum membrane and has a good moisturizing effect on the skin. It is the best skin massage oil.

Jojoba oil has a unique molecular structure, extremely resistant to oxidation, high temperature and high pressure, and has become a special lubricant for high-tech fields such as aerospace industry, artificial heart, precision instrumentation, and special machinery. The latest research results show that it can be used as a lubricant for magnetic memory media and as an insulating agent for batteries and coils.

It is used to treat cancer, hypertension, coronary heart disease, kidney disease, skin rash, acne, psoriasis, neurodermatitis, trauma, and can also be used as a defoamer and super antibacterial agent for penicillin production. In addition, it is widely used in food, printing, manufacturing and other industries. Jojoba oil is also used for pollution-free biological pesticides. The application prospects of jojoba oil are very broad. Every year, one or two new fields and new uses are discovered in the world. Due to its extremely high economic value, jojoba oil is called "liquid gold" and it is also a renewable resource. Many expensive special substances can be extracted from jojoba leaves and slag for cosmetics.