Perilla seed oil is extracted from the seeds of the Perilla plant. The plant is a leafy, bushy, herb that belongs to the mint family and it is also known as Shiso. It has a robust, minty aroma, which is like cinnamon and licorice. It grows to a height of around 4 feet, in light to medium moist and well-drained soil with a lot of sunlight.

The young leaves and seedlings are edible parts of the plant and can be eaten raw or cooked. The leaves of perilla plant are used as a spice and are usually fried or combined with rice, soups, fish curries and vegetable salads.

The essential oil extracted from the seed is used for flavoring tofu, plum pickles, candies, and sauces. Both the leaves and seed of perilla plant have essential nutrients including protein, antioxidants and fatty acids. The perilla oil is also a healthy cooking oil, that you can use to sauté vegetables or for salad dressings.

Perilla seed oil is extracted by using the cold-pressed method and the seeds are roasted first for a more intense flavor. Perilla Seed Oil contains compounds such as alpha-linolenic acid (a form of omega-3 to plant sources).

Perilla stands out as far as what it offers the skin—especially sensitive skin. 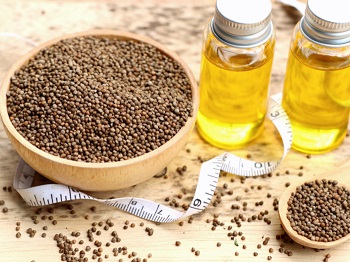 We’re talking now about the oil pressed from the seeds. This is considered a “carrier oil”, and it’s a great source of several different essential fatty acids, which are especially helpful for sensitive skin.

Perilla was acknowledged as a powerful source of essential fatty acids in a 2011 study. “In comparing to other plant oils,” researchers wrote, “perilla seed oil consistently contains one of the highest proportion of omega-3 (ALA) fatty acids, at 54-64%. The omega-6 (linoleic acid) component is usually around 14% and omega-9 (Oleic acid) is also present in perilla oil.”

The anti-inflammatory action of perilla seed oil is a result of several compounds, notably Omega-3 fatty acids and rosmarinic acid. Both compounds have been shown to suppress inflammatory responses and contribute to lower levels of inflammation markers in the body.

The anti-inflammatory action of the Omega-3 fatty acids in the oil is more pronounced on the cardiovascular and nervous systems, while rosmarinic acid appears to exert its strongest action on the immune system, suppressing allergic mediators, but also inhibiting inflammatory responses.

The Omega-3 Omega-6 ratio of 54-64% to 14% makes perilla oil particularly healthy for the cardiovascular system. Normally, we are advised to maintain a 1:1 to 1:4 Omega-3 Omega-6 ratio for optimal health, with perilla seed oil providing the much needed Omega-3. Too much Omega-6 can lead to cholesterol plaques, blood clots, hypertension, strokes and heart attack.

Having an Omega-3 intake closer to the recommended values has been shown to discourage blood clotting and raise HDL (good) cholesterol while lowering LDL (bad) cholesterol levels, thus aiding in the prevention of cholesterol plaques on the inside of artery walls and subsequent inflammation, ruptures, high blood pressure, heart attack and stroke.

ALA, the Omega-3 in perilla seed oil, has been found to encourage the body to produce anti-inflammatory substances, further combating cardiovascular disease and the whole range of chronic diseases heavily relying on inflammation.

Rosmarinic acid in perilla oil has been found to inhibit inflammatory responses, contributing to seasonal allergy and asthma management. Both perilla seeds and the oil extracted from them can help improve lung function and breathing in asthma sufferers as a result of their ALA (alpha-linolenic acid) content.

This type of Omega-3 fatty acid appears to inhibit the production of leukotriene C4, a type of inflammatory mediator in white blood cells responsible for effects such as breathing difficulties in asthma sufferers

Being an excellent source of Omega-3 fatty acids, perilla seed oil contributes to improving brain function and nervous system health. The fatty acid has been shown to even offer a certain protection against neurodegenerative diseases such as Parkinson’s disease and has exhibited a reparative action on the nervous system.

5. May help with rheumathoid arthritis

The Omega-3 fatty acids in perilla seed oil (alpha-linolenic acid) appear to partially inhibit the production of certain inflammation markers in the body responsible for tissue damage in various inflammatory conditions such as rheumatoid arthritis.

This is believed to contribute to improving rheumatoid arthritis symptoms and even reduce the need for anti-inflammatory medication.